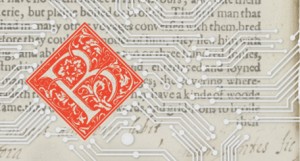 The CSE sponsored a session titled “Roundtable on the Role of the Scholarly Edition in the Digital Age” at the 2016 Society for Textual Scholarship annual conference, hosted by Carleton University in Ottawa. Participants responded to the CSE’s recent white paper, “Considering the Scholarly Edition in the Digital Age,” and represented both members of the committee and the broader editorial community. Just as the CSE envisioned the white paper as a starting point for a larger and ongoing conversation among scholarly editors and digital humanists (including those who are both at once), the roundtable panelists also conceived of their presentations as continuing, but by no means settling, the complex questions and problems confronting scholarly editors working in the digital age.

Interested readers should continue to watch this space for subsequent posts from the panel participants.

The content of this site was created by individual members of the Committee on Scholarly Editions.

The views expressed are those of each author and do not necessarily reflect those of the MLA.

This site is part of the MLA network on Humanities Commons. Explore other sites on this network or register to build your own.
Terms of ServicePrivacy PolicyGuidelines for Participation
Skip to toolbar